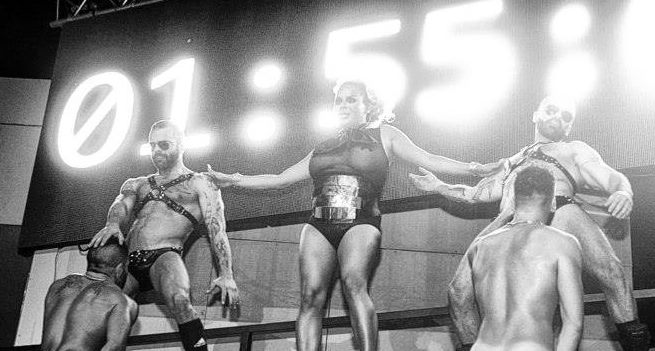 Dancing on her own

Erica Gabriel takes us on a world tour.

She’s come a long way since leaving the Lone Star State some 12 years ago, and when Erica Gabriel struts, folks watch. So much so that she became the featured face in DJ’s Joe Gauthreaux and Mitch Amtrak’s newest release, “Bye Felicia,” which is fast rising on the Billboard dance charts. Check out the video below.

While Erica readily admits that she is “not Felicia,” her ties to the music scene and the parallel universe of club promotion is undeniable. When this article goes live, Ms. Gabriel will be flying across the Atlantic, returning once again to the UK for the Epic party, a second of its kind that takes London by storm. (Click here for tickets)

Traveling abroad is the usual for this NYC party baroness. Only months ago, Erica joined the troops of US-based party brand Masterbeat, and UK-based promotion group Beyond, to turn up the volume in Spain. Brett Henrichsen, the vision behind Masterbeat has redefined the circuit scene. “I think what Brett is doing is really neat,” Erica tells us. “Taking an American party overseas and showing them how we do it in the US.”

With all of that exposure to international gayness, we were interested to know the biggest difference in US queens and those abroad. Having met a lot of gays worldwide, Erica tells us that they are “pretty much the same all over, but I do think the gays in Europe are way more caring and welcoming.” Touché, Ms. Gabriel.

So what does Erica do when she she’s not jet-setting the globe? “My days are pretty plain and boring,” she says. We would assume that some of that downtime is spent throwing some of those hard-earned promotion dollars at some of her favorite things. In case you are wondering… “I am Louboutin girl.” Who isn’t, right? “But I have learned the hard way not to wear them to the clubs. I have ruined a few pairs.”

When it comes to makeup, Erica is not giving us the dish. “During the 1.4 billion years I have been doing drag, I have used all different types of makeup brands.” Understandably, most divas don’t like to give specific trade secrets. “When I find something I like, I stick with it.” She does tell us that the lashes get bigger and the highlights get brighter when she is working. “If I am working a big party, I definitely wear more and beat my mug…. give the kids a lil something extra.”

It’s no secret that the Big Apple is saturated with drag divas. We were curious of the ferocity of competition, and just how diva the divas are. “My advice to the girls… CALM DOWN QUEEN… It’s not that serious its just drag! And who are some of Erica’s favorite performers? Of newly crowned RuPaul’s Drag Race winner, Bianca Del Rio, Erica tells us, “She’s just so damn hilarious!!!” She also admits to having a girl crush on one Miss Roxxxy Andrews. I see a resemblance.