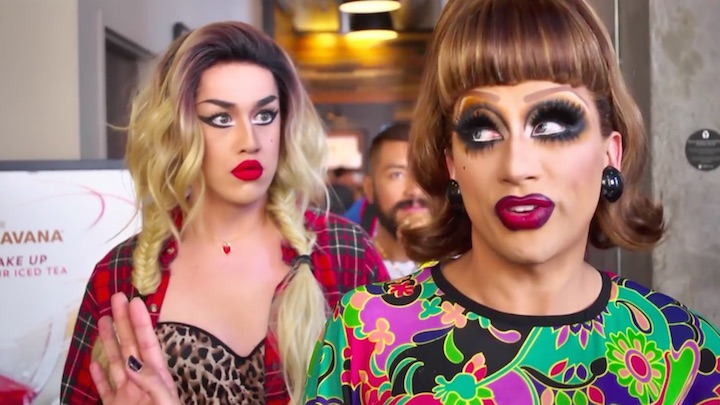 Apparently there is one queen you don’t want to cross while waiting in line at Starbucks. While your average gay may be so inclined to let a #dragstardiva who finds herself running short on time cut the line, Ms. Del Rio will certainly cut a bitch. Catch the video below.

Bianca Del Rio, winner of Rupaul’s Drag Race season six, and fan favorite (and runner-up) Adore Delano paired up in a new Starbucks commercial to portray that only this coffee mega-brand can bring together the most competitive of frenemies. Who couldn’t make up over a cup of joe?

In the one-minute spot, Delano, gussied up in her signature punk-inspired garb and blood red lips, makes her way through the line fairly seamlessly, until reaching Del Rio at the front of the line. With one swift hand-to-the-face, Bianca shuts her frenemy down, reminding her who is the queen bee.

Del Rio, known for her over-the-top (and flawless) painted mug cracks a joke about her counterparts’ makeup. “Didn’t anybody ever tell you that excessive amounts of makeup during the day makes you look really horrible,” barks Del Rio.

But once the girls both receive their skinny lattes, all is well in dragland, and these frenemies are all smiles.

We hope to see more #dragstardivas in upcoming commercials, however only our sisters to the north will catch this spot, now airing on Canadian-based OutTV, the first 24-hour LGBT-themed gay network.