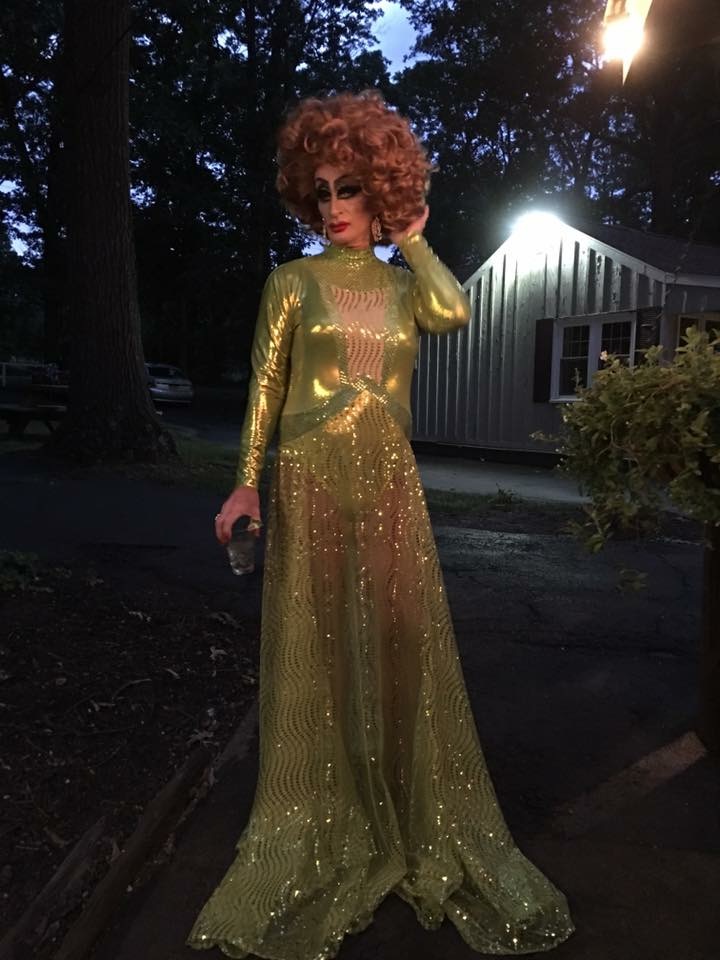 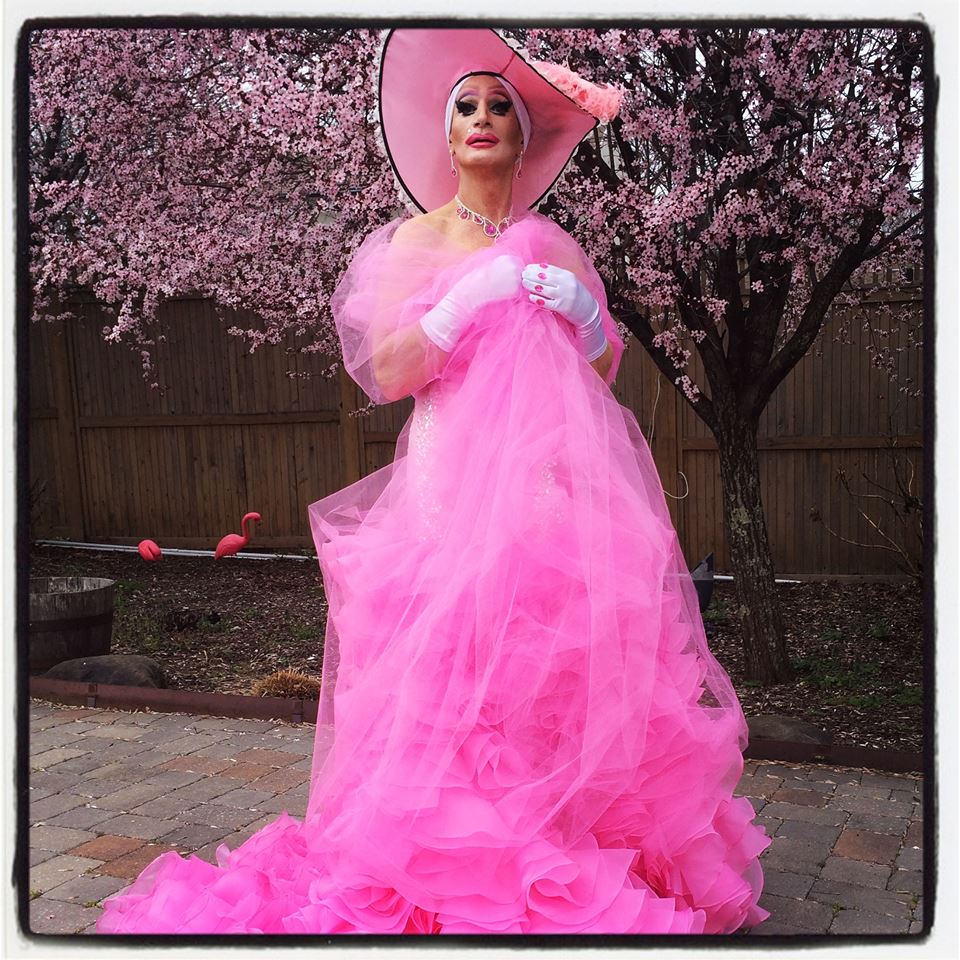 (DSD) Where were you birthed and now reside?

(LadyNutella) I am from a suburb of New York City, aptly titled QUEENS, the town being called Jamaica.

And currently I reside in New Hope, Pennsylvania. I have lived there for many years as a part time resident and then in 1999 relocated from NYC permanently.

(DSD) How long have you been working as an entertainer?

(LadyNutella) I would say since the 1970’s. It brings back fond memories as I recall the days. I’m one of the, should we say, “Older Girls.”

(DSD) No, not old darling…you are seasoned diva. Tell us about a typical day-in-the-life of Nutella.

(LadyNutella) Oh gosh it really varies. I’m a housewife believe it or not. My day or basically my week is devoted to caring for my husband, our home and dogs. I am also involved in various charities and organizations however the maintenance of the Lady is quite arduous work. It takes a lot of effort to look divine at my age. LOL

(DSD) What’s the “state of drag” in New Hope? How does it differ from the other scenes?

(LadyNutella) New Hope is a town that has always been accepting of people from all walks of life. That is one reason we moved here. The girls who engage in drag not only come from the area directly but as far as Philadelphia and beyond. They love our town. We have a very diverse and talented group, each creating stunning looks and wicked personas to match.  Many of the queens have big hearts and donate their time for appropriate causes and charities.

(DSD) There has been a remarkable new wave of alternative drag, gender-bending, non-traditional, what’s your take, and will it last?

(LadyNutella) I love it. I am, as all who know me, totally a non-traditionalist. Anything out of the norm catches my attention immediately. It stimulates my creative juices and propels me forward to get better.

I find it totally inspiring. I’m not the sort of girl to just put on a wig and be pretty, it has to be beyond that for me. I am certainly pushing the boundaries.

(DSD) Many times, the art of drag is broken into showgirls and pageant queens. Would you consider yourself more of a pageant queen, a showgirl, or perhaps something else? 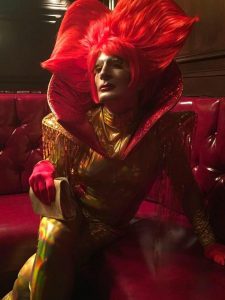 (LadyNutella) Since the conception of the Lady Nutella in 2012, I always considered myself to be an illusionist. A figment of your wildest imagination in many respects. I am definitely not a pageant girl nor a show girl, I would say I am a hostess with a unique characterization, simply because, as I said earlier, I dare to be different and will attempt anything.

(LadyNutella) Believe it or not it’s no way near a full time career, due to the extreme work involved in creating each look I have no choice but to limit my appearances. I’m very fortunate that I can do it in my own way on my own terms. I take breaks to stay fresh and let the public wonder when I will appear and anticipate the latest creation.

(DSD) I see you’re a book diva too, what did you study at St. Johns University?

(LadyNutella) I majored in Spanish to be a high school teacher and I did it for one year when teaching jobs were very difficult to obtain. And of course I minored in theater and design.

(DSD) Spanish!? Mija porque no dejiste desde el principio. Dime, how do you begin to come up with your spectacular concepts and designs?

(LadyNutella) I don’t presently sew but I am now in the learning process. Each year about 20-25 outfits are created and I would say I design and create at least half of them. The outfits come to me in various ways. A picture, an idea a figment of my imagination and I go from there. I grab loose fabric and just make it work.

(DSD) We have many resources for our look, who or what do you use for makeup, shoe designer, wig or hair piece vendor?

(LadyNutella) Since each look is so different and I employ numerous resources I don’t really have any favorites. I do love Morgan Wells she is a brilliant dress designer, but I do have a team that works with me to help me achieve these illusions so they would consider them my favorite. I would not be what I am without their creativity. I was never much of a wig wearer more headpieces but I have lately gotten into some like Tena Marie and Philippe, I just adore their wig work.

Keep a look out for our launch of BLACK CARD – our fantastic online store to keep you looking divalicious.

(DSD) Who are some of your favorite drag performers other than me?

(LadyNutella) I would say, Alaska, Bianca Del Rio and Pearl. I just adore their style, which they make it look so effortlessly.

(DSD) Who or what inspires your looks?

(LadyNutella) Most of them come to me in my dreams or day dreaming. As I crochet thoughts just jump out at me as I relax. I recently did a Chinese Empress Look and that idea came to me while in a Chinese restaurant. Why not wear a Kimono?

(DSD) Mama just don’t tell Raven or Raja, ever thought of auditioning for RuPaul’s Drag Race? What are your thoughts about the show?

(LadyNutella) Absolutely, but as I can’t yet sew! I’m limited and by the time I learn they may have to audition me in a wheel chair or walker. Drag Race has done wonders for the drag world. It has brought it out front and center therefore encouraging many girls who might not thought of doing it in the past.

(DSD) Mama hot glue does wonders. Tell us how drag became a part of your life?

(LadyNutella) I have always been enthralled with it since my earliest days as a teenager. I would play with my mother’s make up not even knowing or understanding the concept of it but I knew deep down there was a yearning in me to be something more than just Gary, but to create a new mystique and I have tried to do that.

(LadyNutella) For the most part we all try to help and encourage each other. There is a core group who are always there for you and each other. I have been lucky and had a great supporter, Miss Pumpkin, in my corner.

(DSD) Who is your biggest fan?

(LadyNutella) My husband 100 percent. He sees what I go through with each appearance, constantly encouraging me and never says you can’t do that.

(DSD) What’s been the most awkward thing to ever happen during a show?

(LadyNutella) I was performing in a musical drama and forgot my line. I went blank. I just stared at my costar for about a 1000 years and thank god he just caught it and kept it moving right along.

(DSD) We all been there just watermelon away, but I understand it would be difficult with it being a live performance. Where do you perform most often?

(LadyNutella) I am just now branching out to Philadelphia and New York City. Shows are presently in the works so I am not free at the moment to give out names till the dates are set in stone, but here in New Hope you can catch me at John and Peters, The Cub Room, The Raven, and The House of Legends.

(DSD) What’s coming up next for you? 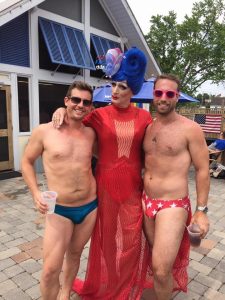 (LadyNutella) There are a number of things in the development process, along with some shows.

I am debuting at Bob and Barbara’s in Philadelphia in July and that will open my presence there.  As well as doing return engagements at The House of Legends and John and Peters.

In August, I will return to Provincetown where I will entertain all the vacationers and get a chance to sing with Mr. Doug Repetti at the piano. I am quite excited about that. Also I’m taking singing lessons as I want to sing with my own voice for the future events with Mr. Bob Egan a noted pianist here in New Hope.

(DSD) A month has gone by since the shooting at Pulse. What do you think could be done to prevent this from happening again in a different LGBT establishment?

(LadyNutella) My feeling is that these are random acts until we have stronger and more stringent controls in place I fear they may keep happening.

(DSD) Have you ever experience harassment in or out of drag? Explain your experience and how you were able to overcome, “haters.”

(LadyNutella) Luckily, I have never been harassed while in drag. I was however the subject of sexual mental and verbal harassment during my high school years. I attended an all-male high school and was tormented with words and actions, even beaten with wet towels in the locker room as I was “Different” and sexually attacked. It is hard even now to put this down on paper but I have learned at that time it was beyond my control. These actions haunted me for years and devastated myself esteem. I totally turned inward and it took me years to realize my worth as a person worthy of happiness and acceptance.

(DSD) What do you hope comes out of this tragedy?

(LadyNutella) I hope that if anyone today experiences this I would say to them, don’t let it beat you down fight back, which is something I did not do. Stand up for yourself and realize you are a human being and you were put on this earth for a reason. Don’t let it destroy you. The haters are going to still hate but you must rise above it.

(DSD) What does community mean to you?

(LadyNutella) Community to me means that we are one. We should love and embrace each other and honor our differences because in the end that is what makes our lives worth living and gives us meaning.

Wishing you a fantastic summer with the boys in P-town, darling!