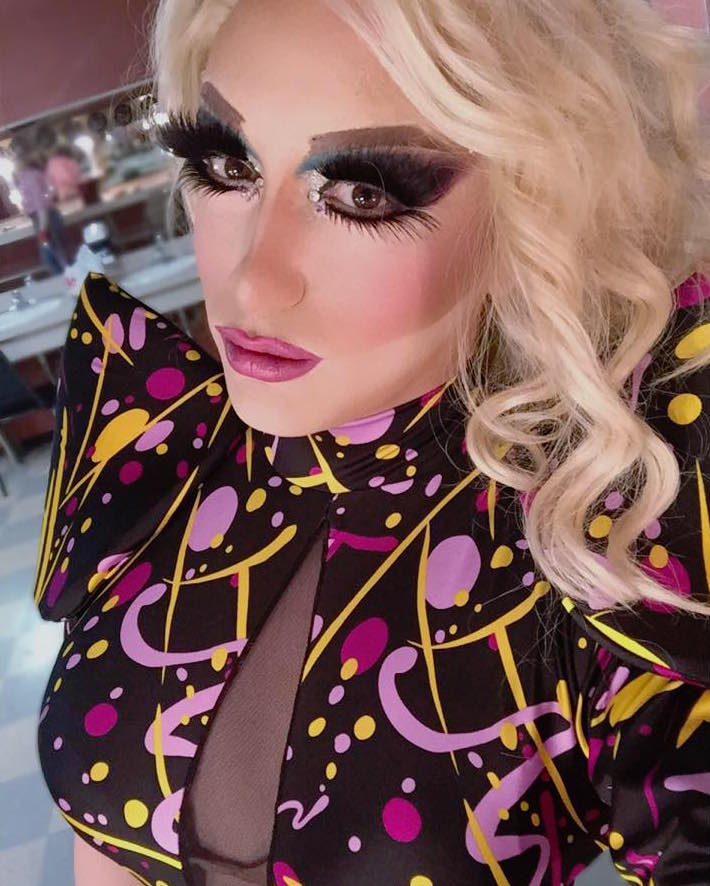 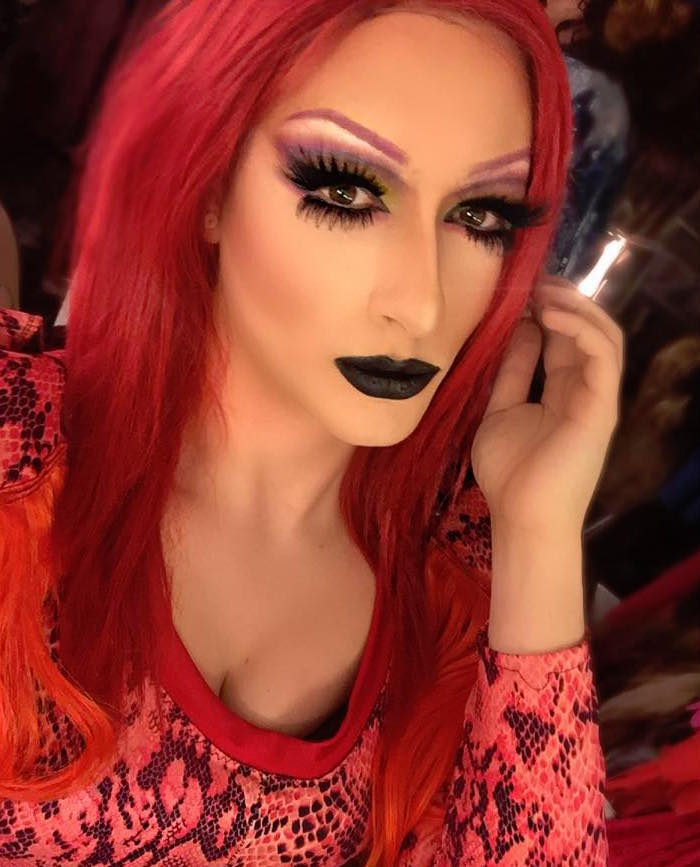 Style, class and the friendliest queen you will ever meet. This Midwest beauty took some time to share her thoughts on sister queens, stiletto discounts and her love of Sasha Colby. This diva talks truth, and left us wanting more.

(DSD) How long have you been performing as an entertainer?

(IdaKay) As of November of this year, it will be 2 years.

(DSD) 2 years? Wow, hunty you look fierce for less than two years, I was a goblin my first year. Who is your biggest fan?

(IdaKay) Thank you. My partner, Jason. He has been to EVERY show that I have been a part of and has never ever once complained and has always been the best Drag Husband. I truly love him. For sure my drag family, all of the sisters I started with as well. Most of my drag family has known me outside of drag years prior and have helped me through so many obstacles I love and appreciate them all.

(DSD) He is adorable. Tell us about a typical day-in-the-life of Miss Ida Kay.

(IdaKay) Well, I work about 55 hours a week at my day job. So that’s a pretty standard day for me! Selling shoes to all the adults and children! I’ll wake up, go to work, come home, typically surf YouTube or play with my roommate’s dog, then head to bed and do it all over again. On my off days I spend with my partner Jason and we will go walking on the canal downtown and explore small places to find somewhere to eat!

(DSD) Who introduced you to the world of drag, or got you into drag for the first time?

(IdaKay) My now drag grandma told me about a local open stage and next thing I knew I was being put in drag by my now drag mother! I had always been a theatre kid since I was 8 years old. Now working a full time job, I don’t have time to go to auditions and rehearsals. But drag is the closest thing I have had to theatre and I fell in love IMMEDIATELY.

(DSD) How has your makeup painting evolved over the past year? More? Less? Less is more?

(IdaKay) ALL THE MAKEUP! My make-up has evolved tremendously, it’s ridiculous. Now, when I started drag I thought a 301 lash and some gloss was drag. BUT, my drag mother was not having that, I can’t count how many times she told me, “You going to wear some make up, daughter?”. Now I will pancake my face and transform it completely.

(DSD) Mama knows best. Where are you originally from?

(IdaKay) I’m from the cornfield country of Midwest America – Indianapolis, Indiana! Downtown Indianapolis to be specific, and I’ve been here for my entire life, all 24 years!

(DSD) I’m 24 too, in drag years. Indianapolis is beautiful, home of the hung Jaguars, speaking of did you attend Purdue?

(IdaKay) I did indeed, I was a Communication Studies Major with a minor in Theatre.

(DSD) She educated, too. How does the drag scene differ here compared to other cities?

(IdaKay) I believe that we are true to the true roots of drag. Big costumes, big hair, bucking, twirling, dancing, and PAGEANTS, PAGEANTS, PAGEANTS! Pageants are huge in Indiana. We are known as the “boot camp of drag” in and around the area. 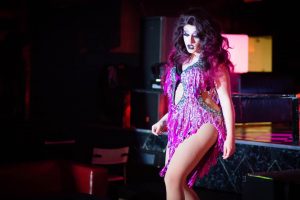 (DSD) Many times, the art of drag is broken into showgirls and pageant queens. You said you were a combination of the two. Care to elaborate?

(IdaKay) I consider myself a good mix of both. I entered my first pageant last December and was unexpectedly crowned Miss IndyProv which I’m grateful. I am competing for the title of Miss Gay Indiana this year. I believe pageants are a huge way to shape who you are as a queen. They will get you together in a heartbeat.

Nonetheless I do believe I am a bit of a showgirl – whether it is camp, dancing, or anything in between – being a showgirl to me is the essence of an entertainer, which I pride myself on being.  I can’t put my style of drag into one category, because I love and admire so many different facets of the art!

(DSD) Exactly you betta work if you call yourself an entertainer. Do you make your own costumes?

(IdaKay) I have a few (namely 2) that I have made, but I typically will partner with other performers to create them. I have been involved in fashion retail for 10 years and I tend to take inspiration from fashion magazines and see how I can drag it out.

(DSD) Hot glue is your best friend in a crunch. Who or what inspires your looks?

(IdaKay) Abstract art and other make-up artists as well! Runway shoes from New York Fashion Week always are a great go to for inspiration.

(IdaKay) Make up…It honestly depends on what kind it is, Kryolan is my go to for foundation. Morphe/Urban Decay for my eye shadows. My BH Cosmetics contour pallet was the best twelve dollars I have EVER spent. Mac Blush pallet has been there for me whenever I needed it. And lipstick, well you can’t beat Kat Von D.

Shoes? I actually am a store manager for a shoe store so I purchase most of my heels from them. (C’mon discount!). But we have a local store called Shoe Trends where you can find all of the heels you need for super affordable prices.

Wigs? WIGS AND GRACE. I cannot tell you how in love with them I am. Every piece of hair I have received has been full and luscious and phenomenal!

(DSD) Drag is expansive with multiple levels, what’s your take on the new wave of alternative drag? 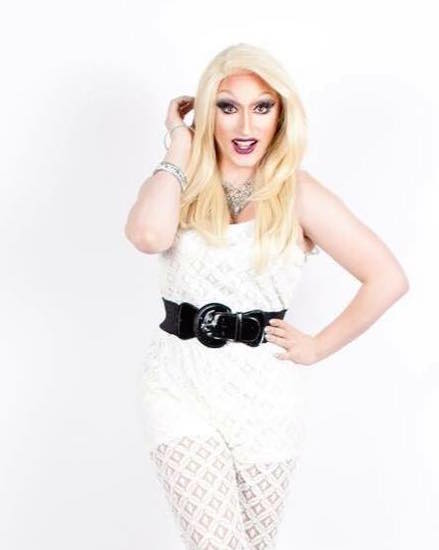 (IdaKay) I personally have a drag sister, who performs in this particular style of drag. I will forever remember there was one song where she came out in a chicken head, duct tape tuck and pasties. And everyone GAGGED over it. Like I said before, we are ever evolving and ever changing. Now is this style of drag going to be accepted everywhere? Of course not. But I do believe that we must be open, and for that I think it will last. I personally love it, is it my style of drag? No. But I respect it tremendously.

(DSD) I agree drag is more than the usual pretty. Now the tea, is the drag community of Indianapolis a close-nit family, or push-you-down-the-stairs rivalry?

(IdaKay) Phew, that is a tough one. I believe that generations stick together. Now that being said, when I first started I do believe there was a rift between the newer and the older generations of drag in our city. However, over the course of the past two years I have definitely seen a bond form. Of course drag will always be competitive, but in Indiana we stick together. We will always have each another’s back no matter what.

(DSD) Ever thought of auditioning for RuPaul’s Drag Race?

(IdaKay) Well, I actually auditioned for Season 9, but unfortunately I didn’t make the cut. I love the show personally. I think it has done amazing things by putting drag into the mainstream and making resources for younger queens, who may not be able to perform yet, available.

(DSD) Who are some of your favorite drag divas?

(IdaKay) Outside of Indiana I am in love with Aquaria from NYC and Ariel Versace from Philly. They are amazing make-up artists that I am always pulling inspiration from. Rubber Child from FL is never afraid to be herself and watching her mesmerizes me. But HONEY, Sasha Colby. If you have never watched a video of Sasha Colby performing you need to. Specifically, her Miss Continental 2012 talent performance.

(DSD)Team talent I would say. What’s been the most unexpected thing to ever happen during a show?

(IdaKay) Okay, so, there is this thing that my close friends call the “Ida Whip” meaning my hair doesn’t typically come off. BUT the ONE TIME I did “Whip My Hair” my hair came off during the chorus. I was like “really? The irony,”. But I went with it and kept going. Actually just whipped the hair into my hands and started putting it on audience members and had them stand up and whip it! That’s the last time I ever did that song.

(DSD) Girl like a professional you keep going. Where can fans of drag see you perform?

(IdaKay)  I am actually on cast at the Back Door in Bloomington, IN. I’ll be there again this Friday! I started out at Zonie’s Closet in Downtown Indy though. As far as regularly performing, I tend to travel quite a bit so I am not at one place regularly.

Want to know more? Follow Miss Ida Kay on Instagram, and keep in touch with her on Facebook. Looking to book this fabulous diva? You can do that here.