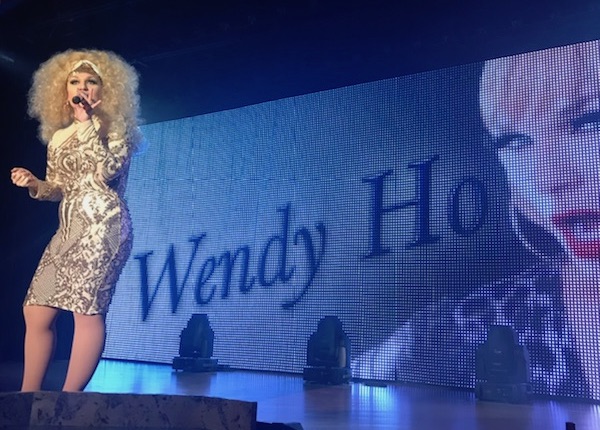 If you missed Sunday’s show at The Rose Room you should be kicking yourself right now. Not only was its host, the magnificent and RuPaul’s DragRace Season 10 contestant,  Asia O’hara on point, but the performers were all top notch. Throw in the phrase, “A direct TV remote control” which will certainly go down in Dallas history, an annoying drunk who Asia handled with grace, and Wendy HO, and the night was top notch.

Who’s Wendy HO? If you’re asking me that, I hope you’re new to drag– otherwise imma have to slap you.

Wendy HO is a female drag queen, (a touchy subject right now I know), who has released some songs that I know you’ve heard at drag shows before. Her 2014 “Greatest Shits” album was top ten on the Billboard comedy charts for over three months, and most recently she was part of “The Divas of Drag Tour”. Essentially if you love drag you should know who Wendy HO is.

Now about the performance. Not only did she sing live, but she sang original parodies of songs that had the crowd laughing their asses off. My favorite was her take on Rihanna’s “We found love”, which she turned into, “Suck Yo Dick In a Public Place”. I wasn’t even that drunk– and I couldn’t stop laughing. The words, “I’m about to pee myself laughing” have never been more true.

Even better was the fact that our straight friend, (named Ha), who had never been to a drag show, couldn’t stop talking about Asia and Wendy. Asia even brought Ha up on stage and had him introduce Krystal Summers. The video of which we will be cherishing for quite some time. The Asia and Wendy– with some assists from the other performers, truly turned him into a drag lover and what more can you ask for?

That’s not to say that Krystal Summers or Sasha Andrews were any less fierce of course. In fact they both gave ridiculous performances that I’d normally expect to have to pay money for. The fact that these Queens came out and performed at the Rose Room for a show without tickets on a free entrance night at S4 is amazing. I can’t thank them enough for giving us their all and allowing us an easy way to convert more people into lovers of drag.