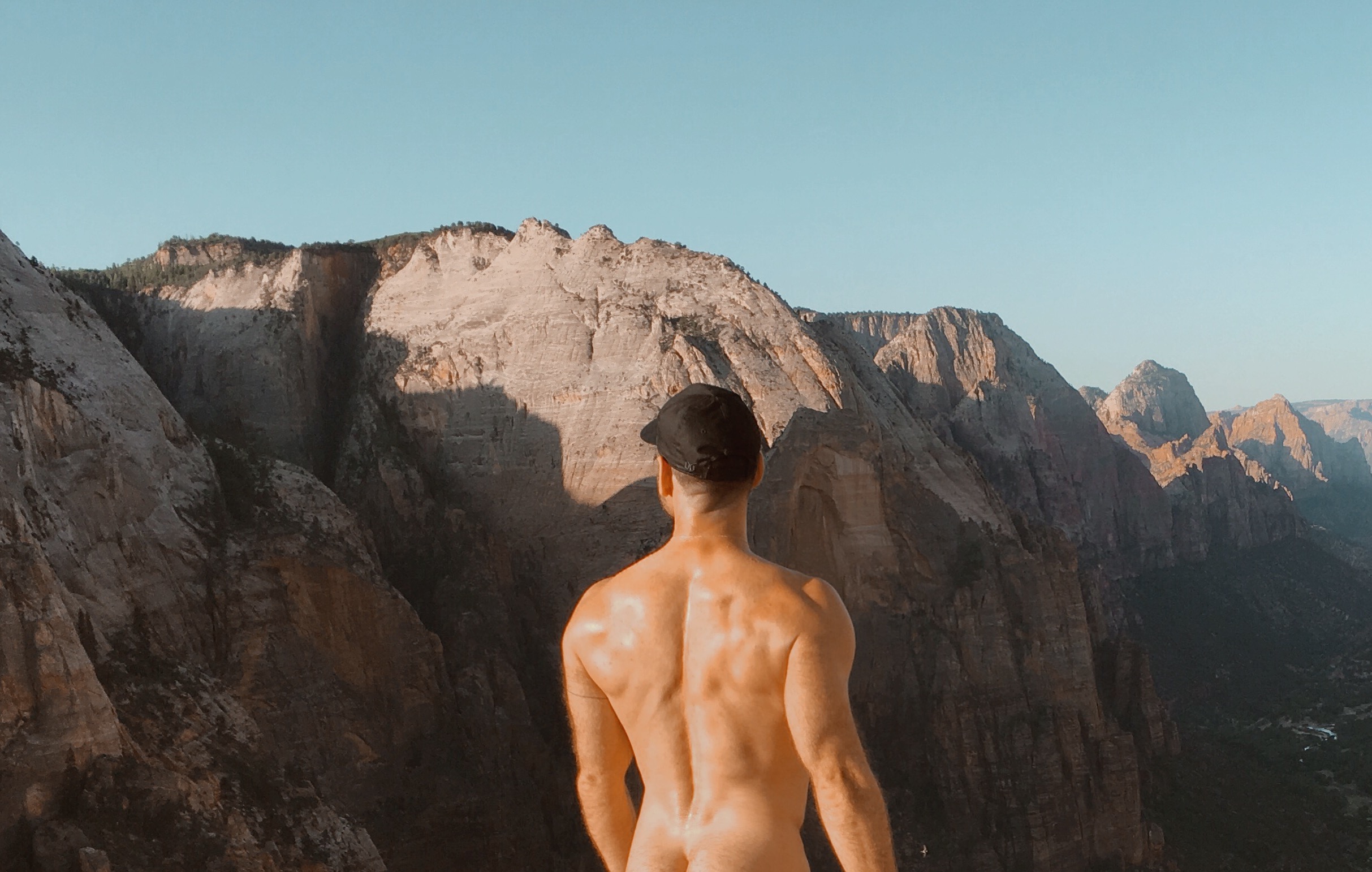 This faceless crusader, merely known as Mr. Outdoors, has become an Insta-star who is putting his butt to work in a small but largely effective way. A simple interest of being nude-in-nature has many double tapping in complete thirst, Butt it’s all for good.

Mr. Outdoors, whose identity is kept secret, sells each of his portraits-de-derriere via his website, Butt For Good. In turn, this anonymous body-god donates 50% of its profits to organizations who have found themselves under social attack. His mission? That his philanthropic campaign becomes as famous as his booty.

All thirst aside, in this world of political nonsense, insta-celebrity, and overly materialized everything, it’s hard to find the good still left in humanity. Yes, as of late, we are feeling overwhelmed with what is happening in the world, and attacked on the daily.

However, silent heroes still remain, and they are hiding in plain sight. Heroes, who But for the grace of good, dare to live their naked truth keeping a open-minded decade of liberation alive and doing so while delivering the goods in silent but powerful protests.

Mr. Outdoors, as secretive as he is, chatted with us about his naked-wanderlust, his philanthropic efforts, and the reasoning behind it all.

Drag Star Diva: First up we have to ask, prior to your insta-stardom, what made you want to devote an Instagram account to your butt’s wanderlust?

Mr. Outdoors: I wanted to have a fun outlet for my love of the outdoors. And being naked outdoors.

DSD: When did you start to notice your account was gaining some traction?

MO: I am not sure when that exactly happened, but about three months into starting the account, I vividly remember hanging by the pool at a fancy clothing-optional resort in Palm Springs with my friend, and literally, out of nowhere, I got 12,000 followers in one afternoon. We couldn’t stop screaming seeing the numbers growing so fast – THIS IS CRAZY!

DSD: So many people nowadays are dubbed insta-famous. In fact, many even aspire to be “influencers.” Did you ever think that you would become insta-famous?

MO: Never in my mind did I imagine this would have happened. I purposely didn’t follow or tag anyone. It was really just a quiet outlet for me, my love of the outdoors. 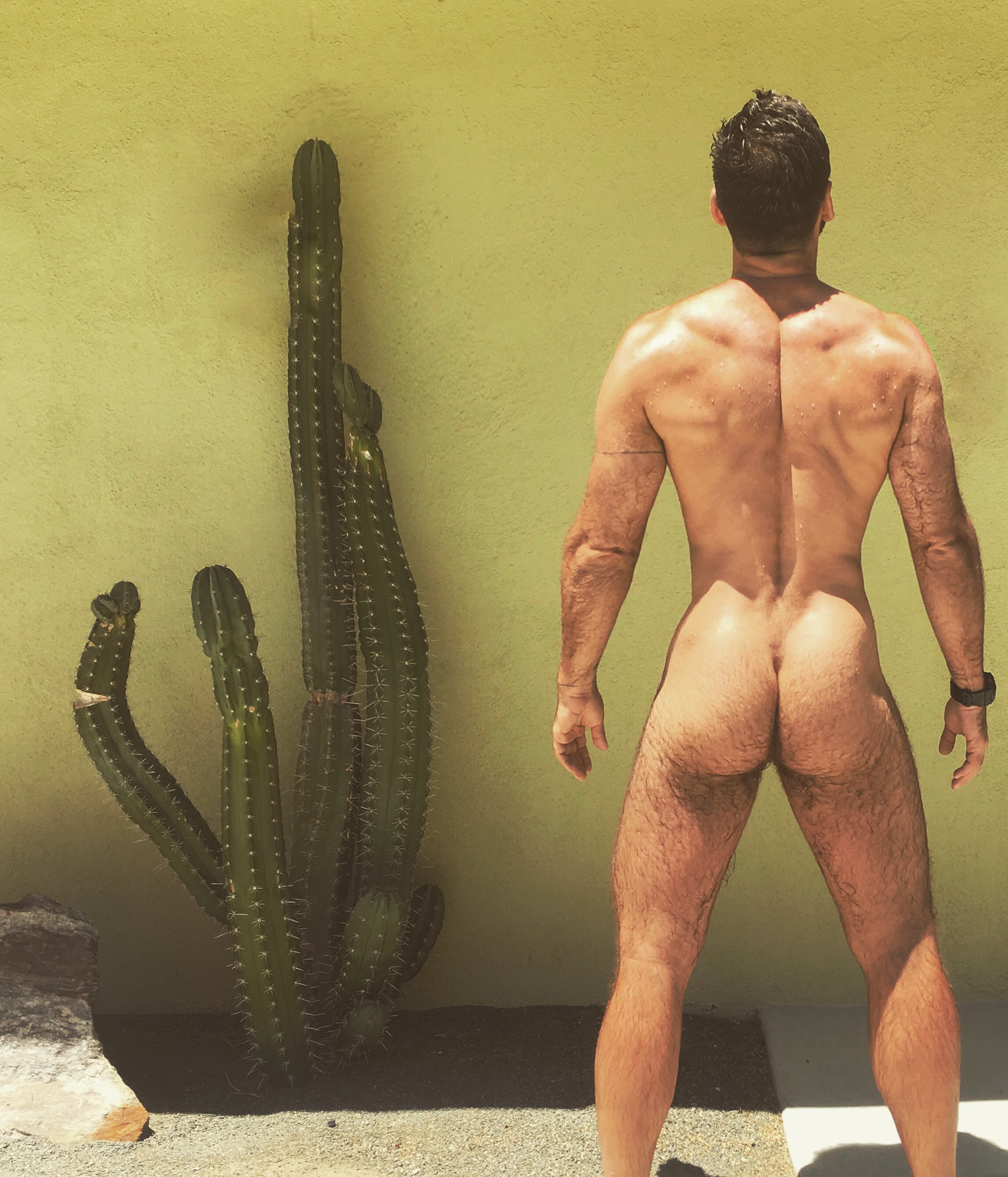 DSD: Social media has created the new form of celebrity. We see a lot of people cashing in, “butt” you decided to take that fame and do something amazing. When did you decide to turn your butt into cash for multiple non-profit organizations?

MO: I think it was somewhere in May of last year when I realized that I could do something positive with so many followers, instead of just feeding my own butt ego, and hopefully make even the slightest difference. It was instant – the name, the purpose and how to go about it.  Let me make something clear, I am by no means isnta-famous nor a celebrity, but can you imagine how different the world could be if every person who has hundreds of thousands – even millions – of followers did the same, instead of just stroking their egos and lining their own pockets? I believe it would be a much happier place.

We have so much more access and ways to connect and create positive change nowadays, but we have become greedy and self-absorbed. It doesn’t matter how many times people tell you you’re hot, unless you really think and feel it yourself. And how much money does one really need? I could go on and on about this. My hope, once I started this, was to inspire others to do the same.

DSD: On your site, people are able to purchase some of your Instagram snaps, where you then donate 50% of the proceeds to an organization of the buyer’s choice. Why did you decided to leave it up to the buyer to donate to the charity of their choice, as opposed to just donating to one?

MO: Two reasons. First, I feel that in today’s political climate, there are so many different groups being attacked and marginalized – women, people of color, gay, trans, everyone who’s different in one way or the other. I picked organizations that I believe in and that help fight the good fight for everyone.

Second, I wanted to give people options to support causes that are closer to their hearts, not force them to support just one thing. I even started a campaign encouraging people to donate any amount to any organization they want that is creating positive change. They can send me a receipt of their donation, their butt pic and I will feature them on my IG story.  That’s been fun too, I want to use ALL the butts for good!!!

DSD: How has the response been of your efforts?

MO: It’s been wonderful. People have been so kind. Of course, I dream about raising hundreds of thousands of dollars but I am grateful for what we have accomplished so far and every single person who supported it and continues to do so.

DSD: What are your thoughts on the divisive climate we are in today?

MO: I can’t even watch people fight on the news without breaking into tears. I don’t understand how we can treat one another the way we do. I am in disbelief. And it makes me deeply sad that this is what it has come to, but I see the light. I think things have to get really bad for real change to happen. It’s how it works on an individual level. We don’t stop eating the donuts until the doctor tells us we have diabetes. I believe we are headed for a major cleanse. Not just here in the US, but globally. The divisiveness and inequality have become so large, there are so many frustrated, exhausted and rightfully angry people around the world. I am not a politician, but I am a hopeful dreamer that one day we live in a united happy place.

DSD: You have chosen to keep you identify a mystery, at least on Instagram. How about the organizations? Do they know who this naked hero is?

MO: Not to my knowledge, no.

DSD: Why is it important for you to keep private especially when you have done so much good in the public?

DSD: Your butt is not the only thing grabbing the eye, but everything you do outdoors is in beautiful spaces. How is it you get to travel so much?

MO: I just love the outdoors. It helps me decompress, get clarity and find peace. I somehow managed to set my life up in a way where my priorities are met. Traveling is on top of the list so I made sure my job allows for that before I signed the dotted line. But trust me, I don’t take it for granted. I am very fortunate and grateful for it. Yet another reason to pay it forward.

DSD: And how do you manage to get naked at the most perfect spots?

MO: Well, sometimes it takes some risk taking and often times getting up at 3am to beat the crowds. But it’s always worth it.

DSD: Have you always been a traveler?

MO: According to my mom, yes. Since the age of 4 when we would be walking down the street and I would spontaneously let go of her hand to start boarding any public transport that stopped nearby. ADVENTURE AWAITS!!! 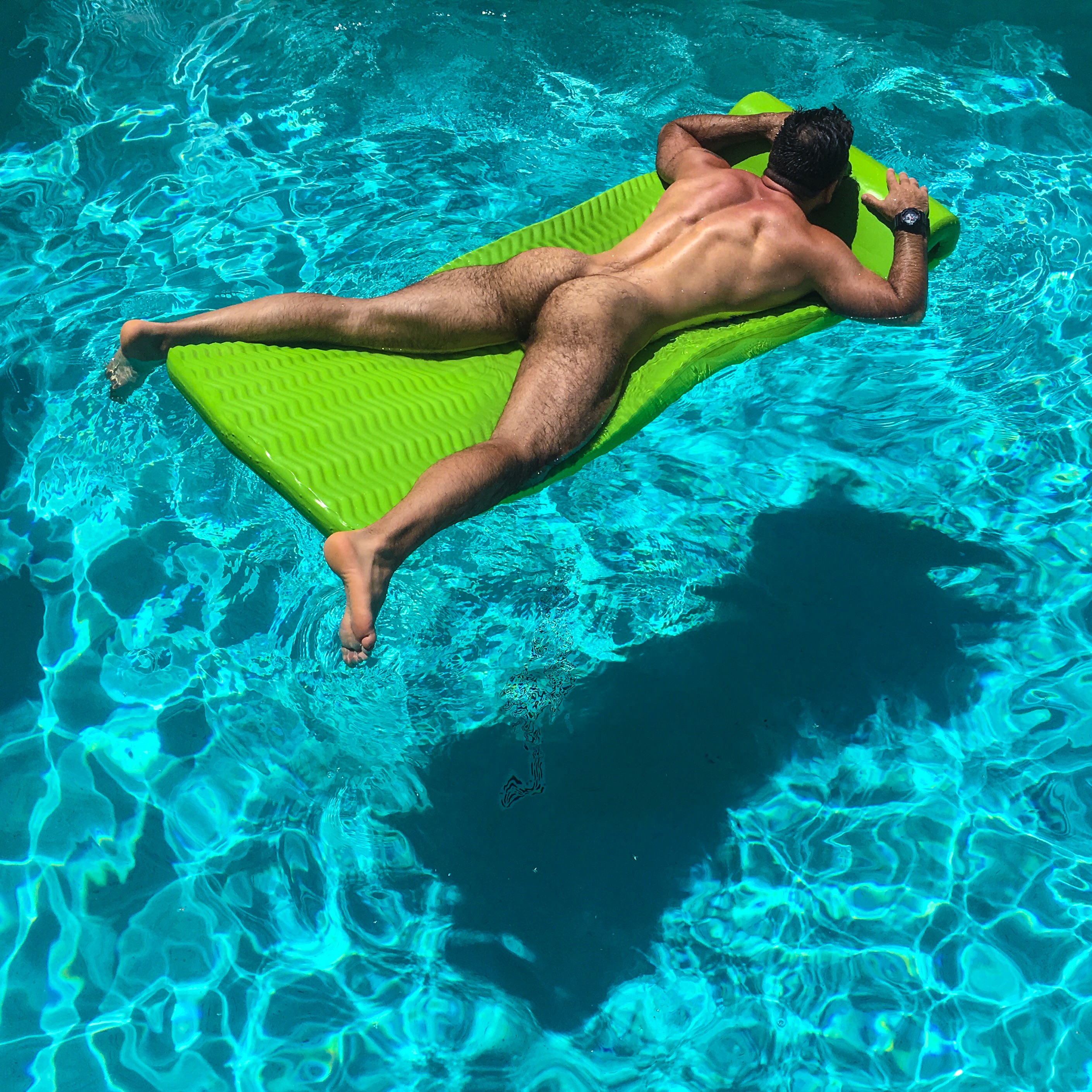 DSD: Have you always been a nudist (or enthusiast)?

DSD: Some would say it’s a freeing feeling to be all natural with nature. Would you agree?

DSD: Do you think this is a hobby everyone should try in their lifetimes?

MO: I encourage everyone to try it at least once. There’s no other feeling like it.

DSD: Where are some of the best places you’ve been?

MO: New Zealand and Iceland are at the top of my list. Yosemite National Park is my favorite local spot.

MO: Canada. I have been there before but never explored the beautiful nature. So I can’t wait to go soon.

DSD: Have ever been caught snapping a pic?

MO:  Many times. [Laughs] Here‘s the thing. When you do get caught,  you just have to own it. And I feel somehow people who enjoy the outdoors, when in nature, are less shocked about seeing a naked person taking a pic. It really isn’t a big deal. Nothing really is, unless we make it one.

DSD: Do you have a favorite photo – one that has a certain memory attached to it?

MO: Ooooh, that’s a great question. No one has ever asked me that. Hmmmm, I think it’s the pic of me on top of Angel’s Landing in Zion National Park. It’s such a beautiful pic and that place is just magical, therefore always packed with so many people. I managed to have it to myself for a whole 10 mins. The universe was on my side.

DSD: What’s next for the ButtMan? Could a book be in your near future?

MO: I honestly don’t know. Many people suggested that, the only issue is, most of my pics were taken with iphone so the quality isn’t the greatest. I mean it’ll do for Instagram but print is a whole different animal. BUTT I have just purchased a fancy camera so I think the book could be coming soon. [YASSSSSSSS.]

MO: What do you hope the world will take from your efforts?

DSD: I hope that people realize they can have fun and still do good in the world. And that the most fulfilling thing to do is something selfless for no other reason than just doing it. That kindness and consideration of others goes further than any fame or money will ever go. 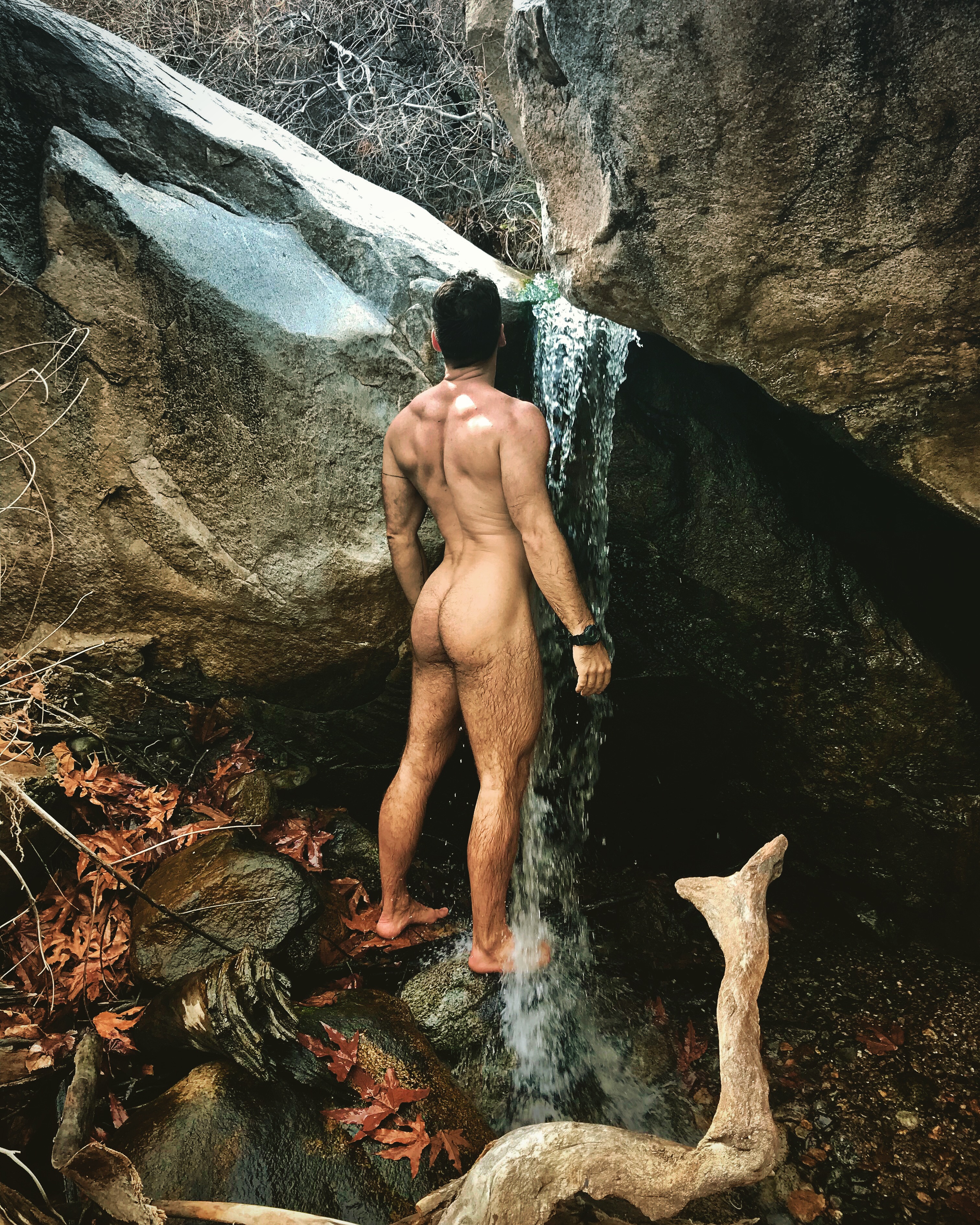 Follow Mr. Outdoors now on Instagram and be sure to purchase a print or two (or more). We have our eyes set on that very large cactus-shot.