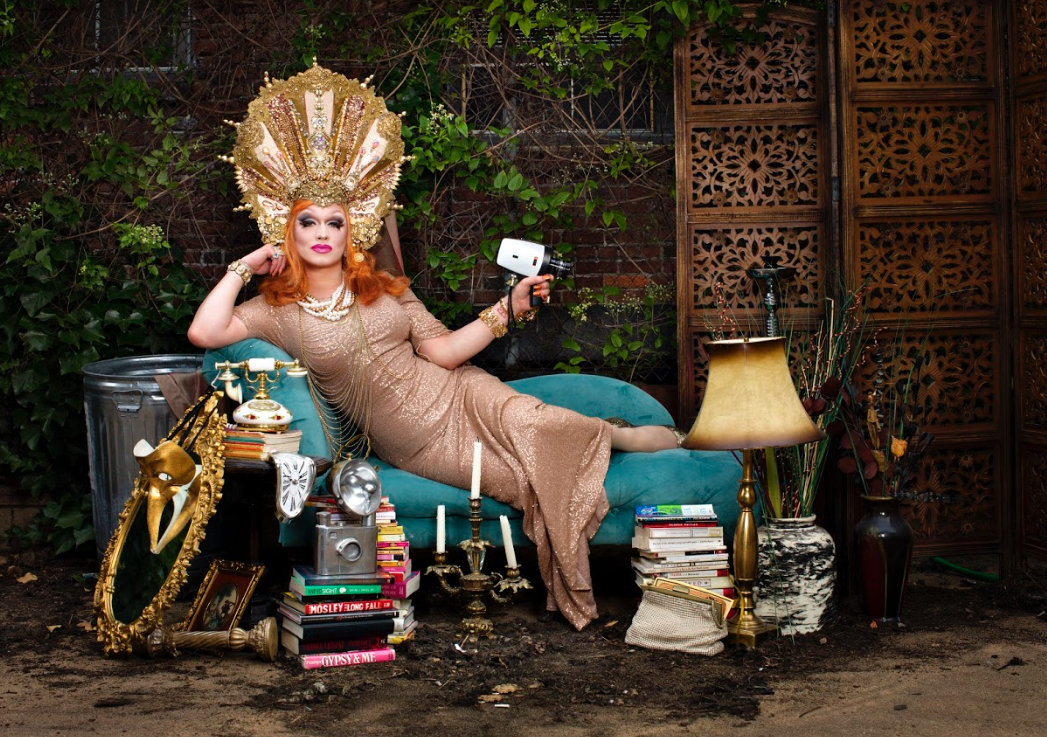 Jinkx Monsoon Spills Tea On Her New Rock Album, Her Martyred Drag Sister, And Coming Out As Gender Non-Binary

We had the opportunity to sit down with RuPaul’s Drag Race season 5 winner Jinkx Monsoon to talk about her new album Ginger Snapped, her sister BenDeLaCreme (or BenDeLaChrist as some are now calling her), and coming out as gender non-binary. Her newest release, we learned, focuses much more on her music, and less as a cabaret performer. The ginger herself took some time to open up about her evolution a half a decade after her crowning.

“In my first album The Inevitable Album, I was inspired by Bette Midler’s bathhouse album,” says Monsoon on her rock journey. “So with that fantasy accomplished, Major [Scales, co-creator and collaborator] and I wanted to take this direction more as musicians than Caberet performers.”

Jinkx teamed up with some notable names for the sound. “Lady Rizo and I have been friends for a while – actually graduating from Cornish College which is where I went for acting school,” notes Monsoon. “We never went to school together but she was always kind of famous at my college and she was the first person I reached out to. She is perfect on Pianoman.”

One particular collaboration for the album left her gagged (and us too):

“Amanda Palmer, was always one of my music inspirations ever since I started buying my own CDs at age 14. My manager is always pushing me to shoot big, and I decided one night I would   send a message to her on Twitter, and within an hour she responded!”

Trust us divas, this is an album you will want to pick up. It’s every bit of the Jinkx we fell in love with on RPDR season 5, and full of all the quirkiness a girl could ask for. 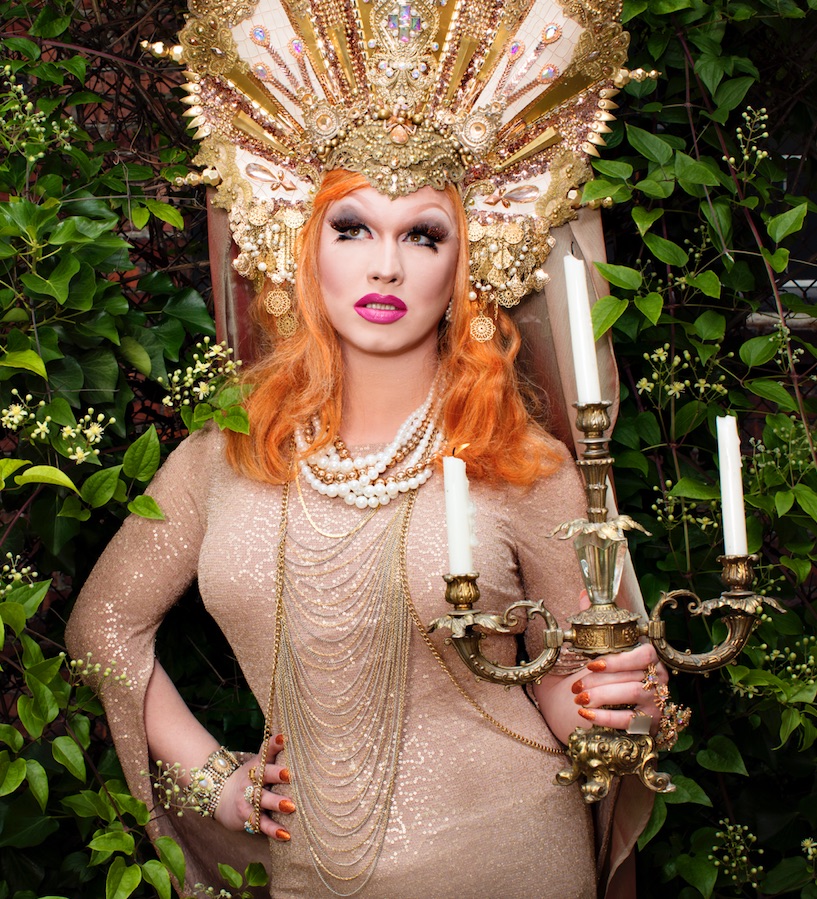 Also know as Jerick Hoffer, this funny gal comes from a season with legendary cast members of RPDR. Twas the season the world was introduced to Ro-Laska-Tox – the BF-efy gal group made up of Alaska Thunderfuck, Detox, and Roxxxy Andrews. It was also the season we got to know  Alyssa Edwards and Coco Montrese up close and personal, and perhaps more importantly their infamous feud. And who can forget that circus-queen-turned-Miss-Congeniality Ivy Winters.

So, when the chance came to have a chat about sisterhood with Jinkx, we couldn’t pass it up. After all, it’s been five years since the Seattle native’s reign as America’s Drag Super Star.

Flash forward to the present and we are still reeling over the All Stars 3 drama. While we all may have had to pick our glossed lips up off the floor when BenDeLaCreme axed herself, the season 5 winner wasn’t at all surprised. “I never would’ve eliminated myself on All Stars,” said Monsoon. “I think Ben eliminating herself could not be more in character with the person I’ve known Ben to be throughout our entire friendship.”

We can all appreciate the relationship between drag sisters, and this couple is no exception.

“Ben is very self-aware and continually mindful towards other people, and a huge advocate in our community. I can say Ben went on the show more for her own zeal for drag than for winning the crown, so I wasn’t surprised that she did it.” Monsoon goes on to say, “I was happy that she set out to accomplish what she needed to accomplish and bowed out when she thought she had done that.” 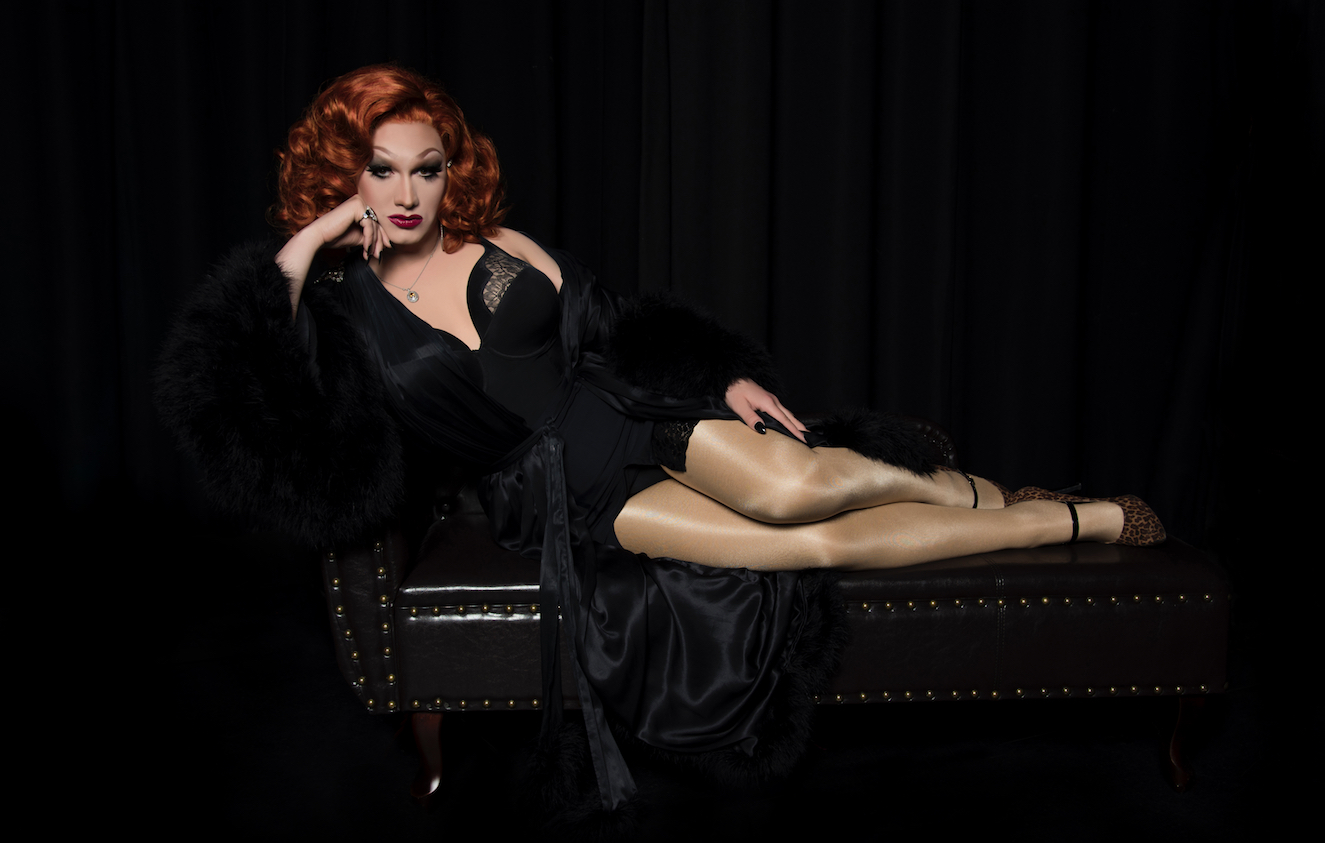 “I never thought I was going to win. When I made it to the top five, I realized how close I was, and there was no way you could’ve talked me out of going for it,” says Monsoon of that almost-there moment.

All Stars is more than just a second chance at the win, even for past winners now, but it’s a chance to catch up with our favorite queens of the past. So would Jinkx return for the next All Stars if asked?

“When I first considered going on again I was dead set against it, and then I saw my friends having a lot of fun, and that changed my mind,” says Jinkx of a possible work-room return. “Now, I would go on to show how much I’ve grown since my season. Even though I won, I still knew then that I had a lot to learn and had a lot of ways I could improve.”

RPDR has done so much for drag, however as to the impact it’s had on the LGBT community as a whole, some would say it is a phenomenon. One dialogue in particular that RPDR continues to struggle with is the issue on that other polarizing G-word: gender. Past contestants of the show have now came out as trans women. Carmen Carrera, Gia Gunn, and Peppermint have been vocal about being trans, and the support for these ladies has been incredible.

Jinkx also has had a recent coming out moment.

Monsoon provided Drag Star Diva with a little better understanding of what it is to be gender non-binary, a term we as a community continue to learn and understand.

“I can say that I have always known certain aspects of my personality and my gender identity, even though I didn’t know the right ways to express them. I’ve been doing drag since I was fifteen, and drag was always my way of expressing the gender identity that I felt and couldn’t express in other areas of my life.”

Gender seems to be a balancing act perhaps, do in part to the potlrizing nature of the issue.

“When you are a gender non-conforming person and get to this place in your life for whatever reason you know you don’t have to wear the uniform expected of you; it’s a tricky place to be when you have to fit in a hetero-normative society.”

“Now that I live my life doing what I want to do, I have freedoms in my life that I’ve been blessed with,” Monsoon told us. “I don’t have to dress like a boy anymore, and I can be a male body-identified person who dresses the way that I feel like dressing in my day-to-day life. It still does cause some frustrating moments at the airport [laughs], but that’s small potatoes considering the history of trans activism and rights in our country.”

In recent news, the issue of gender inclusivity fell onto RuPaul himself after making a surprise statement to The Guardian about trans people being allowed to compete on RPDR. We wrote an article about RuPaul’s comment last week and conducted a poll to see how our communities were feeling. (You may be surprised by the results.)

During our interview, Monsoon was candid in responding to our questions about the situation.

“I grew up in a drag community that had all different kinds of people in it, and I’ve gotten to understand trans rights so much more because I was a part of the drag community. I honestly think in order for the show to continue to evolve, [it] is just going to have to embrace inclusivity which I already think the show has done and I think it will continue to do. Sometimes it takes small steps and sometimes big steps.”

Since its inception, RuPaul’s Drag Race has exceeded every expectation and put drag on the map within both the mainstream public and media. Monsoon appeared to agree saying, “I think RPDR is doing everything it can to show how important our community is in the mainstream media, and the mainstream media needs to recognize that, and continue to utilize that as viable talent for entertainment.” 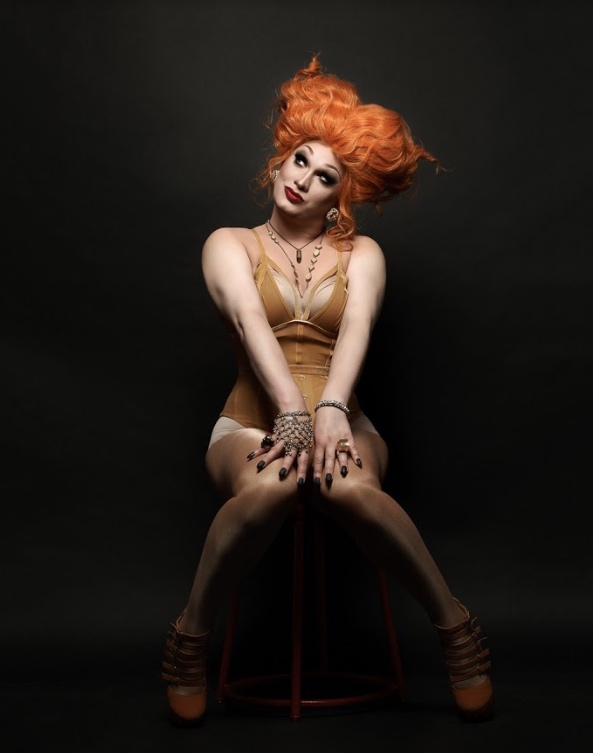 It’s hard to think of a time before Drag Race. While it may appear to be just another competition show, it spotlighted one area of our community, which then illuminated another area, and then another and yet another.

With over one hundred queens have now competed on the show, drag may well be the new norm of celebrity. Today we see Cosmopolitan featuring drag queen beauty tutorials and networks like Viceland picking up queen-hosted talk shows. Monsoon weighs in.

“Drag queens are building careers out of drag now because drag is respected in way it wasn’t before,” says Monsoon. But there is still that fourth wall that needs breaking. “We need more queer content in television and media. RPDR is wonderful resource and form of entertainment for a lot of us, but it’s only one aspect of the queer community.” Jinkx continues saying, “What I would love to see is the queer community represented in many different ways and formats, and it’s important that it is for-queer-people-by-queer-people. That’s what made RPDR so successful.”

Storylines across a variety of television programming are beginning to include drag queens, but is all of the representation good? “I wish media at-large would see the impact the show is having…because we are still seen as set dressing or a novelty rather than just being allowed on the show as the world-class performers that we are.” 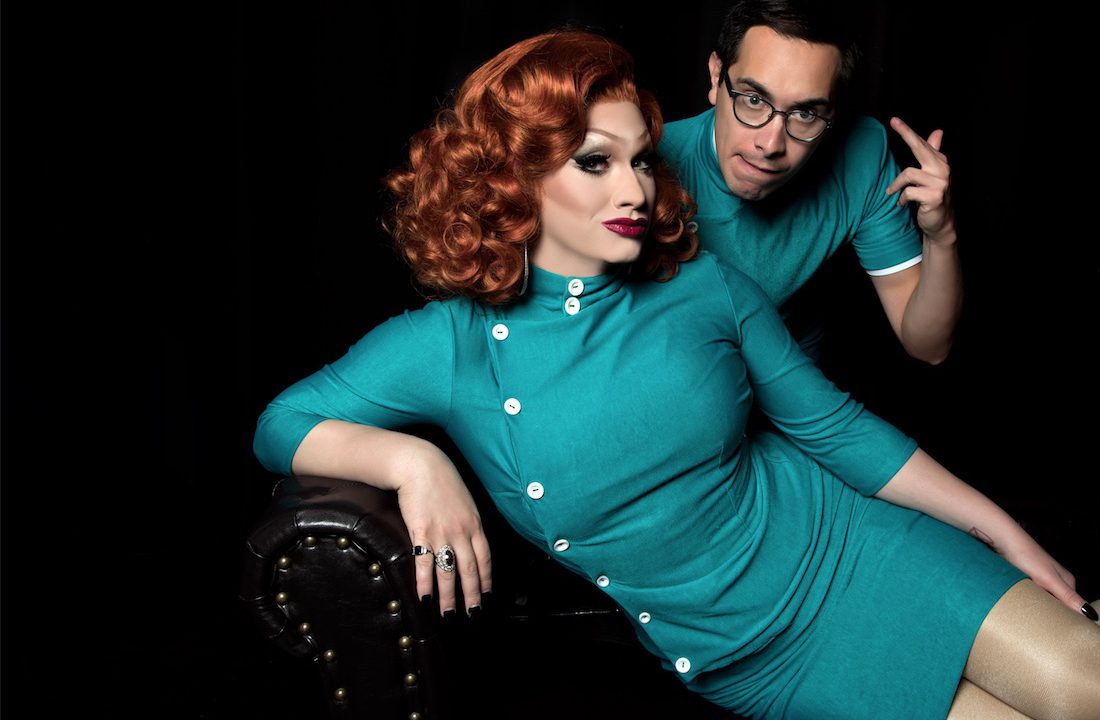 On where Jinkx is going.

To date, Monsoon has seen many accomplishments: winning the crown of groundbreaking show; starring in a successful documentary, a cast member of the touring drag show The Hater’s Roast, and now on the forefront of breaking gender norms. So what’s next?

“I’m going to take Jinkx as far as she can go“ Jinkx asserts. “I want to wait a few more years before I do a follow up documentary. What I loved about Drag Becomes Him was that it showed my story before, during , and after drag race all the way up to me crowing the next winner, and that’s a long span of time.” It sure is. “It’s crazy how time has flown since the first season. I still have memories of Ongina and BeBe coming to my local drag bar in Portland when I was still a budding queen, and now these people are my colleagues and peers. It’s still crazy to me.”

This month will mark the 10th season of RPDR. A full decade later and our ideas of who and what drag is are ever-evolving, thanks in part to trailblazers like Jinkx. Let’s see what RPDR has in store for us this season. Engines starting March 22nd on VH1.