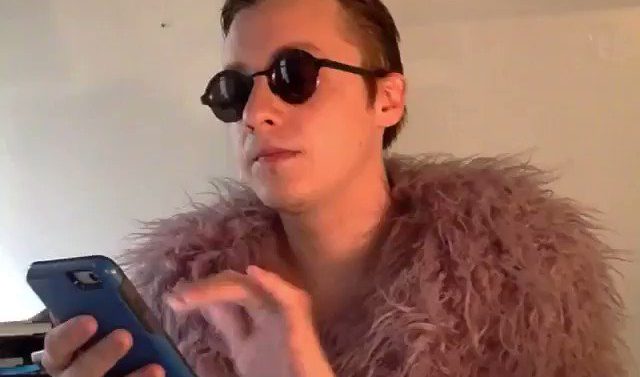 Ty Baumann, a queen living in New York City took to Instagram and read Arron Schlossberg for filth – and did so in Spanish. Now Baumann’s post has over 33k views and continues to thrive with its own viral life.

Last week, a video of a New York City Attorney having a racist meltdown after hearing people speaking Spanish surfaced. Outraged Americans were quick to respond with their own videos and memes taking the bigot to task. The backlash went as far as publishing his contact information, filing complaints with the New York City Bar, and staging a Pachanga (Spanish slang for an over-the-top party) outside his apartment, which hundreds of Spanish-speaking New Yorkers attended. However, one video posted to Instagram as well went viral.

Ty Baumann, a queen living in New York City, recorded himself calling the douche bag attorney and placed a long order via voicemail. The message took the opportunity to educate the racist on our mutli-cultured country, and Ty took it one step further: he served it to him in Spanish.

Oh the nerve of it all  honey! Can we all just bask in that  blush-pink feathered Yoko Ono moment Ty was serving us? Yass gawd!

Follow him, tweet him, and get into his gig. Seriously his gig-game is so real! According to his Insta-bio he is an actor, singer and playwright, and yes honey a DRAG QUEEN! You can listen to Ty on iTunes and Spotify now and check out his acting chops on YouTube. We are living for Ty.

Someone get him a booth at Drag Con NYC asap!