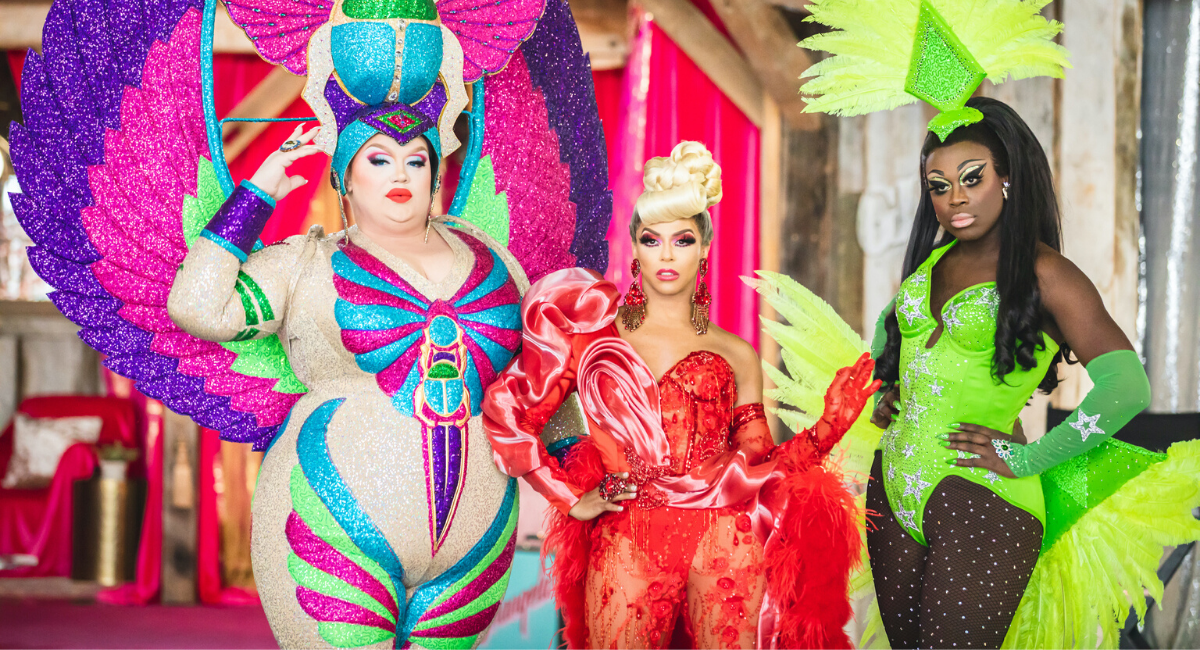 HBO’s “WE’RE HERE” has us all wanting to be there, too

What do you get when three celebrity drag queens embark on a good tidings journey across small-town America? Absolute magic. HBO recently debuted WE’RE HERE, an unscripted campy-but-cautious tale of three RuPaul’s Drag Race alum finding diamonds in the rough and transforming them into more empowered souls – one rainbow-colored dream at a time.

We had the opportunity to sit for a virtual kiki with Eureka O’Hara, one of the three starring queens, to chat about life, working with Bob and Shangela, and getting a chance to do drag with people the right way.

Episode one, set in Gettysburg, Pennsylvania, paints a clear picture of what you can expect throughout the six-episode season: a lot of glamour, a lot of laughs, and a whole lot of pixie-dusted fun. But what you soon discover is that much like drag itself, beneath the perfectly painted mugs and outrageous personalities lie real stories. Real people with real vulnerability.

“During the filming it takes an emotional toll,” Eureka told us about working with their newfound ‘drag daughters.’ “We can feel the realness of what’s going on, and you know, we have to be very careful and respectful to those situations.”

And trust us, there are plenty of situations.

In each episode, Eureka, along with Bob the Drag Queen and Shangela Laquifa Wadley, find themselves in a different town charged with one divalicious mission: to use their fierce drag wisdom to inspire their own “drag daughters” to jump stilettos-first outside of their comfort zone and onto the stage.

Every episode is a glitterati metamorphosis where the drag daughters come together with the queens to show off their pretty and polished makeovers at a drag show for friends, family and in some cases the entire town.

But the small-town selections kept the queens on their toes to respond to some not-so-warm welcomes from the townsfolk. In one episode, the queens are approached while sashaying down the sidewalk by a man who appears not to be gagged with his out-of-towners encounter.

“We weren’t even planning on going in that store. We were literally just walking by. He was standing outside the door and I said hello to him. And he immediately responded with ‘y’all have to get off the premises or I’m calling the law.’”

Shocker, or maybe not.

“In our minds we’re like, we’re on the sidewalk so we didn’t think nothing of it. We just assume we can walk down a public path regardless of our costumes. But honestly, we just moved on cause we’re like, we’re not going to stand here and fight with these people.”

In a time where many of us belong to large LGBTQA+ communities and feel, perhaps naively, oblivious to the prejudice that still exists in parts of the country, it is certainly still there. But as expected, even when faced with challenges, the queens keep their cool and keep on strutting.

“It’s just interesting how people react out of fear,” Eureka notes. “And you know, we try not to meet them with anger. That’s what creates violence. Fear plus anger equals violence.”

And ain’t none of us got time for that.

Undoubtedly, a key component of the show’s inevitable success will be the natural chemistry that exists between Eureka, Bob and Shangela. When asked about the best part of working with their sisters, Eureka told us that basically they were all on the same page about their task at hand and were going to work together to make sure the work was done – and done well.

Trust us divas, this is one to watch. There are no gimmicks – no cringe moments. This is not just another drag transformation series, and that is to the delight of all the cast members.

“One thing that Bob [the Drag Queen] says a lot is he just really didn’t want to do the type of drag show where it’s like, oh we come in like fairy god mothers and bibbidi-bobbidi-boo everything’s happily ever after because that’s not real.”

“We all just agreed on the project for the same reason, and that was to create change, because of the diversity of the show, and because we were going to get a chance to drag with people the right way.”

Watch the Official WE’RE HERE Trailer below and catch it on HBO every Thursday at 9 pm ET/PT.